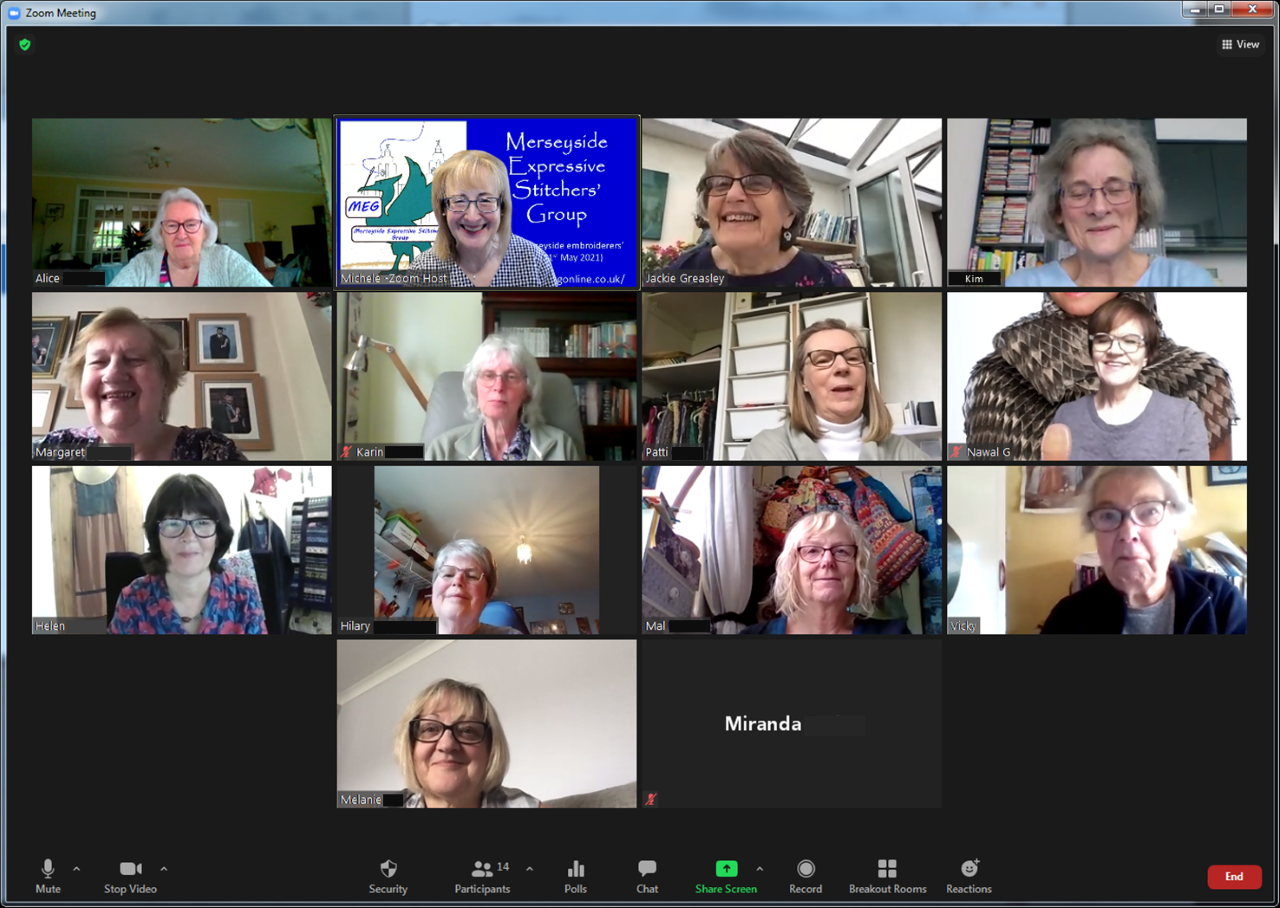 True to their words to take us travelling, Kim and Alice gave us another country to enjoy and drool over the textiles produced by local people. Vietnam is a long narrow country with 54 ethnic groups and there appear to be various styles of embroidery. The highland country seems to be the area where most stitching and weaving occurs. Near the Thai border silk shading is taught, with a 2year apprenticeship; simple but effective stitching is taught. Buddhist Temples show a strong Chinese influence, with plenty of dragons in sight. There is a Museum of Ethnology, which reminded our tutor Helen Barnes of an eastern version of Beamish! Here were shown costumes with embroidered facing bands on coats and head dresses. Many costumes were woven from hemp although modern materials are being used. Women wear highly embroidered clothing in yellow/white/red colours, with batik also used. Cross stitch seemed to be a popular choice, also appliqué.

Helen provided members with a sheet of templates and stitch examples prior to class. She demonstrated various stitches and each member chose her own motif, these were repeated down the centre of the sample. Motifs were worked in a slightly chunky thread and then out lined by chain stitch in a thinner thread; this is typical of Vietnamese textiles.

There was much patient instruction for members to learn various stitches; the last part of the afternoon was spent in learning how to make a tassel, for those who had no knowledge. The sample book mark, once having the back covered, could be decorated with a tassel or beads sewn to the lower edge.

A jolly day spent acquiring a new method of embroidery and stretching our range of design. Many thanks Helen.

Susan Briscoe is the author of many books on boro, kogin, bag-making and patchwork but is perhaps best known for her book ’The Ultimate Sashiko Source Book’, which has now been translated into 12 languages. We were lucky enough to have a Zoom session with her in which she described how she came to live in Northern Japan whilst teaching English and her subsequent meeting with a sashiko teacher and a patchwork teacher. These women and a few more went on to found the Yuza Sashiko Guild and mount several exhibitions in the UK whilst keeping their close connection with Susan.
Susan showed us photos of a 19C sledge-pulling waistcoat with extensive sashiko work across the chest strap and other antique examples with their traditional patterns of cedar stitch, rice stitch and persimmon stitch. It is estimated that there are around 100 different sashiko patterns. The Yuza Guild have produced quilted coats, art quilts, stuffed toys and bags all with sashiko surface decoration often worked by eye rather than drawn out in advance. They have produced three books of their work in Japanese and one in English.
We saw many different stitched examples and Susan explained how they had been worked. One of the most impressive was her depiction of the goddess Kwan Yin, riding on a fish which is approximately 6’6” tall and 48” wide!
If you would like to know more about sashiko and see Susan demonstrating some of the techniques, just search for ’Susan Briscoe’ on www.youtube.com
[Show as slideshow]

February’s talk was by Hilary Naghashi who showed us photographs of the Iranian landscape and gave us an insight into Persian textiles. The landscape was wild and beautiful and mainly unchanged for years and, in the current circumstances, it was lovely to see something other than Liverpool! Hilary and her family travelled around in a beaten up car where she had to hold onto the handle to keep the door shut! Family connections gave her greater access to some of the nomadic people,although sometimes she was unable to take photographs.

Some of the people lived in yurts, well insulated with fleeces and decorated with textiles hanging from the roof. They are still able to weave textiles and dye wool with basic equipment out in the countryside. The rug weaving is mainly done by the men, and they have achieved great speed. The quality of the textile can be determined by the number of knots at the back.The motifs on the rugs or textiles are naive and sometimes the number of legs on an animal depend on the available space! The camels are distinctive and all motifs charming. The colours are bright and inviting, though not always light fast. Many textiles are cut from a large roll so any size can be purchased. The vendors seem to be arranged by trade into the streets, for example a street of traders selling tools, followed by a textile street, then perhaps a street of food vendors.

We were also shown photos of recycled textile hangings. These were made from pieces of used tunics sewn together in a patchwork arrangement. Nothing goes to waste.

The buildings were also of interest. Local customs meant restrictions on talk between men and women. Some mothers in law wore scarves across their faces and their sons in law had never heard them speak in many years of living together. Many properties had a double door with a different knocker on each side, one for females to use, the other for males. The different sounds meant that whoever was inside would know whether it was a man or woman at the door and send the appropriate person to answer.

The camels were well decorated with colourful woven bands decorated with metal tassels. Many of these tassels found their way into the markets where they were sold as earrings.

We were shown some slides of the Ali Qapu palace with many fine decorative arches inside. These provided the inspiration for some textile pieces that Hilary had made, and it could be seen that both the architecture and the naive motifs could be used as a starting point for our own work. The textiles were bright and colourful and Hilary’s talk gave us a good insight into Iranian life and was very well received.

Jenny O’Leary’s Zoom workshop was a great success with many attendees and some from other guilds attending. The session started at 10.00am with a break for lunch then continued 2pm till 4pm.

In the period for lunch we were able to chat with each other- during this lockdown period a bonus. We could either take part in the workshop or watch the carefully planned session.

Tissue paper was the main medium used and Jenny had an array of uses designs  which were inspirational. She showed step by step the method she used to dye dilute,tear, and design using stamps etc and how each reacted to different methods. At the end work was shown and each person had a different aspect of the methods used.

Jenny then showed more ways in which we might experiment going on to use this technique and was open to more questions on the workshop .

Thank you Jenny for a lovely day.

Here are some photos from people who attended this workshop. If you would like your photographs to be included here please send them to secretary@megonline.co.uk.

My granddaughter and I made a 3D butterfly out of the papers. Not what I had in mind but she needed a 3D insect for a school project!

Sorry I’m a bit late with this- I was so busy yesterday.
The first two are the layered tissues. I polished them up a bit with Liquiblend wax that’s not the same as Acrylic Wax but had to do. The dotty pattern on the first one was a carpet rubbing with sennelier oil stick, inside the sandwich. It showed up more opaque than the oil pastels.
The second two photos are single sheets that I also stencilled with Milton and painted with procion dyes and the red one was rollered with a pattern wheel that I’d dipped into wax then sprayed with Milton and also painted. For me, the single sheets are more useful. I do painting in oils with cold wax as well as stitching work, so I can use bits for a last thin collage layer, and use bits backed with Misty fuse for machine stitch work.
I really enjoyed the day. Thanks for organising and spreading it out to other groups. I’m in the Birkenhead group that meet at the Williamson museum and gallery – sadly under threat of closure again.

I really appreciated the invite to the Jenny O’Leary workshop thank you and thoroughly enjoyed the session. I thought it worked extremely well and hope to join in on more of the same if possible. I have included some of my results and hope to use them in sketchbooks and textile work. I am a lapsed member of Preston EG and now I intend to rejoin, so thanks again.

This website uses cookies to improve your experience while you navigate through the website. Out of these, the cookies that are categorized as necessary are stored on your browser as they are essential for the working of basic functionalities of the website. We also use third-party cookies that help us analyze and understand how you use this website. These cookies will be stored in your browser only with your consent. You also have the option to opt-out of these cookies. But opting out of some of these cookies may affect your browsing experience.
Necessary Always Enabled

Any cookies that may not be particularly necessary for the website to function and is used specifically to collect user personal data via analytics, ads, other embedded contents are termed as non-necessary cookies. It is mandatory to procure user consent prior to running these cookies on your website.