Karen Scott is based in ROAD Studios, 69 Victoria St, Liverpool L1 6DE, and for Light Night 2017, ROAD Studios will be exploring the role time plays with the creative process. Each participant will be recorded for of one hour as they create a piece of artwork, giving an insight into their creative process and the work that goes into it. Karen recorded a video of herself embroidering a stumpwork bee. 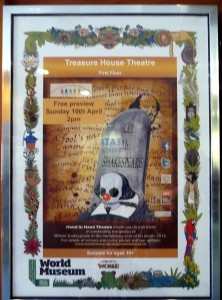 ruffs and hats for a forthcoming production- a play titled RIP Mr Shakespeare. Brenda Muller, Sheila Morris, Karen Scott, Vicky Williams and Hilary McCormack all made some Elizabethan ruffs and hats. This was much appreciated by the theatre company who invited us all to the first performance of RIP Mr Shakespeare. This was held in the Treasure House Theatre, The World Museum, William Brown St, Liverpool L3 8EN. The play was very funny and enjoyed by all.

If you would like to attend a performance of RIP Mr Shakespeare please visit Hand In Hand Theatre website for further details.

Year of Mercy banner, embroidered by Karen Scott, in Metropolitan Cathedral of Christ the King, Liverpool

A banner crafted by one of Liverpool Hope University’s Design students is on display in Liverpool Metropolitan Cathedral. Karen Scott, a third year student specialising in textiles, worked with the team to produce the art work during a work placement at the Metropolitan Cathedral Art Studio. She said: “The Art Studio is a working textile studio, set up to create vestments, banners and textiles for churches of all denominations. It was a wonderful place to work, alongside such experienced ladies. The guidance and support helped me with my studio practice.”

During her placement, Karen was tasked with making a banner using the logo unveiled by the Vatican in celebration of the Pope’s Holy Year of Mercy. The image, created by Jesuit Fr. Marko Rupnik, is described by Archbishop Rino Fisichella as featuring Jesus – the Good Shepherd – “taking upon his shoulders the lost soul, demonstrating that it is the love of Christ that brings to completion the mystery of his incarnation culminating in redemption”.

Working under the guidance of the studio’s Artistic Director David Peglar, Karen used silk and thread to recreate the image for a banner that will hang in the cathedral until November 2016. Karen said: “I feel very proud and delighted to have completed a piece of work, which will be hung for almost a year in the cathedral in my home town, particularly as it will be there for my summer graduation.”

The banner is part of a suite of banners and an altar frontal that went on display on Friday 4th December, in time for the start of the Holy Year on Tuesday 8th December.

MEG held their Christmas Party on 5th December 2015 and Karen and her friend Melissa Courtney ran a fundraising stall in aid of Hope University 3rd Year Degree Design Students. They had some exciting items for sale, a very interesting stall.

This is an exhibition of work by Design students from Liverpool Hope University. The students were shown a range of objects from the glass, ceramic, costume and metalwork collections of the Walker Art Gallery and produced their own work in response. Karen Scott was among 8 students chosen to exhibit their work at this venue.

NECKLACE by Karen Scott, 2014, copper wire “I was inspired by the theme of remembrance in the form of jewellery made of human hair. The way it is made reminds me of my mother and grandmother knitting. When we were children my mother kept locks of our hair. I used copper wire as it is the same colour as my brothers’ hair”.

Why not have a look at the Liverpool Hope University blog about this event for lots more info? Just follow this link-

Karen Scott has completed her Foundation Course at The Arts Centre, Liverpool Community College and these are some photographs of her final exhibition in June 2013. Her work is based on kaliedoscope images and stained glass windows in our two Liverpool Cathedrals. She will go on to Hope University, Liverpool to do a BA degree in Art & Design.